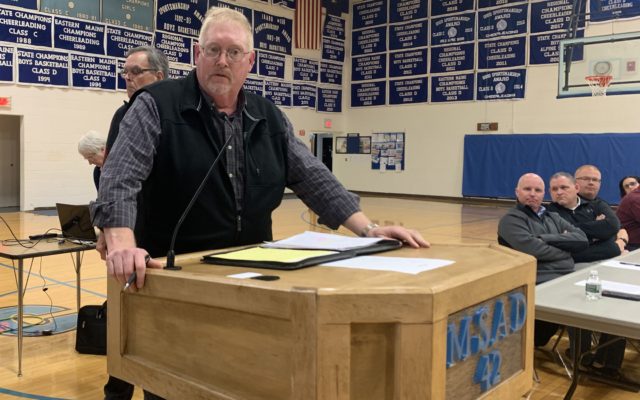 David Marino Jr. • December 20, 2019
More than a hundred residents of Blaine, Bridgewater and Mars Hill packed into a meeting Wednesday night proposing the creation of a new quasi-municipal ambulance service that would serve the towns beginning in April.

MARS HILL, Maine — More than a hundred residents of Blaine, Bridgewater and Mars Hill packed into a meeting Wednesday night proposing the creation of a new quasi-municipal ambulance service that would serve the towns beginning in April.

Over the last few months, the proposal has been crafted by an unnamed committee primarily consisting of local officials from across the three communities, including town managers and selectboard chairmen. Chairman of the Blaine Board of Selectmen, Kevin Grass, acted as a spokesman for the collective throughout the meeting.

The proposed service would cost about $375,000 in its first year, split equally between Blaine, Bridgewater and Mars Hill at $125,000 each. In the following years, funding will come from each town on a per capita basis, at an expected rate of $25 per person.

Grass emphasized that it compelled each town to work as one to strengthen the safety of their respective communities.

“We need to start working together on some of this stuff,” Grass said. “We are not going to be here if we can’t afford to live here.” 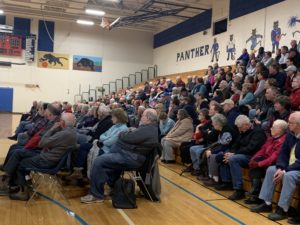 A crowd of over 100 residents came to the meeting in Mars Hill on the creation of a quasi-municipal ambulance service supporting Mars Hill, Blaine and Bridgewater. (David Marino Jr. | The Star-Herald)

In the proposal, each of the three town’s respective select boards would appoint two members apiece on a board of directors that would govern the service.

Grass guided the audience through the proposals, taking questions throughout from residents who saw the issue as life or death. When he asked the audience if they supported the creation of the service at the close of the meeting, the room filled with raised hands.

The proposal for a quasi-municipal service is the latest development in a saga that has rocked Mars Hill and surrounding communities since August.

In April 2019, Bridgewater, Blaine and Mars Hill signed a contract with Northern Light Medical Transport that provided coverage to those areas until 2024. However, on Aug. 21, Northern Light utilized an opt-out clause to inform the three communities that they would be ceasing operations on Dec. 31.

At the time, Northern Light A.R. Gould Hospital President Greg LaFrancois said there had not been a sufficient number of calls to maintain operations in the region. Many towns, including Wade, Washburn and Fort Fairfield, had already dropped the service in favor of coverage from the Presque Isle and Caribou Fire Departments.

The committee challenged the decision to halt operations in December, saying that Northern Light had violated the contract by failing to give the required 240-day notice.

After negotiations, Northern Light agreed to cover Mars Hill and the surrounding communities from Jan. 1 to April 19 of 2020. However, during that period, they will be based in Presque Isle.

If no ambulance service is found by April 20, Grass said residents of these communities will be at the mercy of the Aroostook County Sheriff’s Office, who will be able to send ambulances from nearby communities. Yet, this is too precarious a situation for many.

“No one technically has to serve them, because we will have no contract,” Grass said.

The new service would require an increase in property taxes in each of the three towns. To pay for the first year, Blaine would increase its mill rate by 0.75, meaning residents will have to pay $75 more dollars for every $100,000 of valuation. Bridgewater’s rate would also be raised by 0.75, while Mars Hill would see a slightly lower mill rate increase of 0.5.

Blaine and Bridgewater both plan on having referendums on the matter in January. But because of bylaws concerning election notification, Mars Hill’s proposal is currently set for March.

After approval from each of the towns, the group plans to bring their quasi-municipal ambulance service proposal to Augusta for approval by the Maine State Legislature. He said Sen. Mike Carpenter, D-Houlton, intended to introduce a bill in January.

Jebb Shaw of Mars Hill said that he was drawn to the meeting because of the impact slow response times could have on his family. From his time working as a firefighter, he knows even minutes can make a difference in the quest to save a life.

“I have a wife, kids and a family,” Shaw said. “When they need an ambulance, I want to have one there.”

Glowa travels to Presque Isle to build support for campaign

Gubernatorial candidate John Glowa said that he wants to spur government reform that truly creates a system of, by and for the people when he visited Presque Isle City Hall.

The Aroostook County Republican Committee will hold their election year County-wide caucus from 9 a.m. to noon on Saturday, Feb. 12, at the Presque Isle Inn & Convention Center.

A familiar face to Aroostook County residents has announced her candidacy for the Maine State Senate.
Pets END_OF_DOCUMENT_TOKEN_TO_BE_REPLACED

After almost three long years of having all of our fundraisers “on hold” because of COVID-19, the board of directors of the Central Aroostook Humane Society is happy to announce that our very popular “Toast to the Animals” is back on our schedule.

If you're a parent and your child is old enough to talk, chances are you've heard the phrase, "Can we get a (cat? dog? hamster?) Please, please, I promise to take care of it.”  To say that you feel pressure to ‘give in’ would be an understatement.

One addition to last week’s “Kindness abounds” story on the generosity of local area youth: Just last week, 11-year-old Michaela stopped by the shelter armed with bags of dog and cat food and special treats.
What's Happening This Week END_OF_DOCUMENT_TOKEN_TO_BE_REPLACED