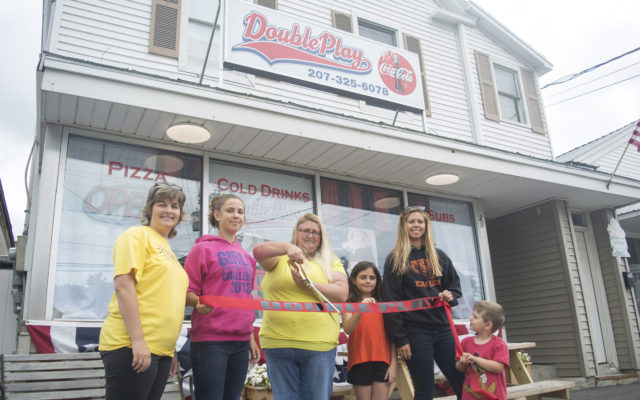 Chris Bouchard • August 14, 2019
Limestone residents can once again enjoy pizza, poutine, and more on main street with the opening of Double Play, a new restaurant located in the former Al-Bear’s Pizza building.

LIMESTONE, Maine — Limestone residents can once again enjoy pizza, poutine, and more on main street with the opening of Double Play, a new restaurant located in the former Al-Bear’s Pizza building.

Wendy Bencivenga and Jim Pelkey run the restaurant with the help of one full-time employee and plenty of family, and over the course of one month were able to completely renovate the interior with a baseball theme.

“My kids are huge athletes,” said Bencivenga. “My daughter was a softball player, and our family has always been into baseball. We found that baseball is a generational theme; little kids understand what baseball is and so do people in their 90s. They can all appreciate baseball.”

The customer area of the restaurant is decked out with baseball-themed posters, framed pictures, and a painting of the new logo on one wall and a giant painting of a baseball on the opposite wall.

Bencivenga said three generations of her family helped with the painting as she, her children, and her father were all involved.

She was also formerly employed at Lowe’s, which significantly helped her locate certain items to help change up the restaurant’s aesthetic.

Bencivenga and Pelkey were inspired to purchase the restaurant as they felt it met a community need, and could provide both Maine School of Science and Mathematics students and the elderly community with a place to convene and dine.

Michelle and Jamie Albert, who owned the building when it was known as Al-Bear’s, have been helping Bencivenga and Pelkey with some of the recipes, and also with the challenges associated with owning and operating a small business in Limestone.

“Jamie and Michelle have been really good about helping us out,” Bencivenga said. “Jamie has been coming down and working with my daughter Kennedy, showing her how to make pizza. He’s shown her how to throw dough, which was pretty neat, and now she’s pretty good.”

In addition to the pizzas Limestone residents knew from Al-Bear’s, Double Play also offers a potato pizza, which is made with an alfredo sauce and potato slices cooked in olive oil and garlic. The potatoes and sauce are then topped with cheese, bacon and ham, then served with a side of sour cream and chives.

Bencivenga said they serve ice cream as well as poutine, a local favorite.

Albert, who is also the president of Limestone’s Chamber of Commerce, said she and Jamie were happy to see the restaurant go to a new owner, as they had been trying to sell the business for about two years.

“I’m happy that there is something for people in the community,” said Albert. “Jamie and I hated to shut it down, but we had so many things going on in our personal lives that it was the best thing for us. We felt sad seeing it vacant for a couple of winters, but then Wendy and Jim called, and we’ve been happy to see that it was able to go to their new dreams, and also to see the community get something back.”

Albert said the four met together a few times after the initial phone call to discuss the ins and outs of running a small business, adding that she and Jamie offered to help in any way they could.

“I hope the community supports, and continues to support, Double Play,” said Albert, “and that they are successful enough to put some new people in the community to work.”

Bencivenga added that she also appreciates support from local residents as well as the sizable group of Canadian customers who frequent the restaurant.

“The town has been very supportive,” she said, “and we want to thank everyone for their patronage. The people who have been coming in have been very loyal.”

The restaurant, located on 20 Main St., is open from 11 a.m. to 8 p.m. on Monday through Saturday. Looking ahead, Double Play plans to hold a grand opening on Aug. 31.

Rep. Sue Bernard, R-Caribou, has been appointed to the 130th Maine Legislature’s Joint Standing Committee on Innovation, Development, Economic Advancement and Business Committee, where she will serve as the ranking member

Sen. Troy Jackson, D-Allagash, was unanimously reelected Dec. 2 by members of the Maine Senate to serve a second term as Senate president.

The Caribou City Council has voted to permit the city manager to hire a private investigator to look into the leak of former mayor Mark Goughan’s resignation letter to a social media page.

In this article I would like to talk about some of the kitties who are long term residents at The Ark.  Cats who have special needs or health issues are often difficult to ever be placed. It is not because we do not want to place them.

Volunteers at Caribou’s Halfway Home Pet Rescue Free Pet Food Pantry recently distributed $2,567 worth of food, purchased from Sleeper’s, thanks to grant funding that not only helped animals, but gave the pet rescue a new mission.