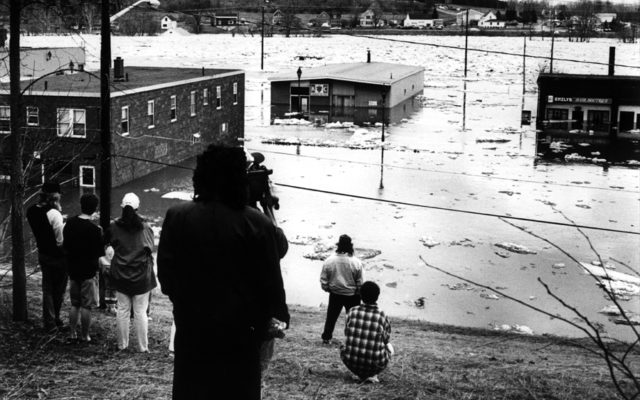 Anthony Brino • April 18, 2019
This April marks the 25th anniversary of the massive flood of 1994 in Fort Fairfield, where another spring ice out is testing the town’s infrastructure.

FORT FAIRFIELD, Maine — This April marks the 25th anniversary of the massive flood of 1994 in Fort Fairfield, where another spring ice out is testing the town’s infrastructure.

As of Tuesday morning, there was about a mile of ice behind Tinker Dam in New Brunswick, which sits just across the border and downstream on the Aroostook River from Fort Fairfield.

“If the ice goes over the Tinker Dam clear, I think we’ll be out of harm’s way from whatever comes out of Washburn,” said Tony Levesque, who serves as Fort Fairfield’s code enforcement officer, among other roles.

Levesque is among a team of town employees, residents and volunteers watching the river and its flood risk under the direction of emergency management director and police chief Shawn Newell.

Levesque was working in the same role for the town in 1994, when a cold winter combined with a quick thaw to create ice jams and flooding that in mid-April enveloped Main Street and other parts of Fort Fairfield, including some that hadn’t seen flooding in many decades. 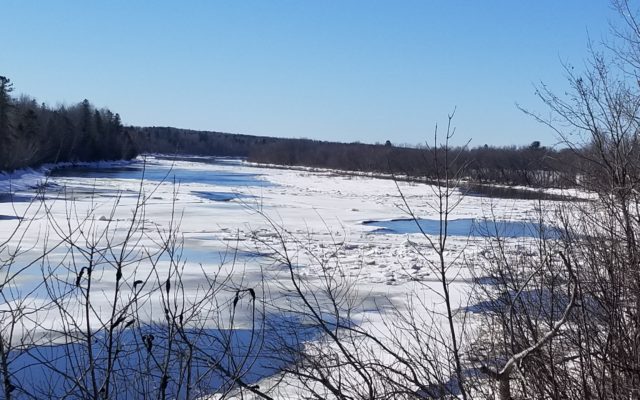 Ice in the Aroostook River near the Caribou and Fort Fairfield town line has begun breaking up with warmer temperatures in The County, as evidenced by this image captured on April 11. (Danielle Camping photo)

“The flood of 1993 was the known flood of record and we attempted to flood proof some buildings and waterways,” Levesque said. The 1994 flood surpassed that. “It went from one end of town all the way to the other end of town.”

Although there were no fatalities in Maine, two Canada Customs agents drowned after the van they were riding in on their way back from checking on Tinker port was hit by a wall of water when an ice jam let go.

In Fort Fairfield, residents and workers were evacuated, the bridge crossing the river was closed, and homeowners, businesses and infrastructure suffered an estimated $5 million in damages. Business owners left their shops on Main Street and watched from higher ground as the downtown area on the south side of the river took on five feet of icy water.

In the aftermath of the flood, which was declared a federal disaster event, the town used a “patchwork quilt” of funding sources to buy out 48 flood prone residences and help families relocate, including to two new housing subdivisions, Levesque said.

By 2000, the town also added new flood-prevention infrastructure with a $6 million, 2,300-foot-long dike running in between the river and Main Street, and a pump station and storage well to divert water from Libby Brook and the downtown area.

While some low-lying areas along the river still see seasonal flooding, such as the Russell Road, Fort Fairfield has not experienced destructive flooding since 1994.

“Unless we have something even more extreme or there is a failure, to the best of my knowledge this has been built to protect our community,” Levesque said of the town’s flood prevention infrastructure.

“‘We will survive’ was the theme,” he said of the community’s feeling in the aftermath of 1994. “I’m glad that we were able to recover the way we have. Our experience in the past has led us to be prepared for any disaster this year or in the future.”

Rep. Underwood chosen for the Agriculture, Conservation and Forestry Committee

Rep. Joseph Underwood, R-Presque Isle has been appointed to serve on the Legislature’s Agriculture, Conservation and Forestry Committee.

Rep. Dustin White to serve on the Transportation Committee

Representative Dustin White, R-Mars Hill has been re-appointed to serve on the Legislature’s Transportation Committee.

Sammy (AKA Sabath) came to The Central Aroostook Humane Society as being surrendered through Animal Welfare Service as the owners just could no longer care for him and his sister.

Visiting vet and team care for 180 felines at Caribou clinic

Dr. Beth Sperry and her medical team from the Animal Refuge League of Greater Portland tended to 180 cats in four days during a free spay/neuter clinic in Caribou in February.

Recently we took two cats to the vet: Jake, who had to have a CT scan, biopsy and dental, and Claire, who was spayed, tested and had a full panel of blood work. They needed this medical attention in order to correct health issues and to eliminate pain.